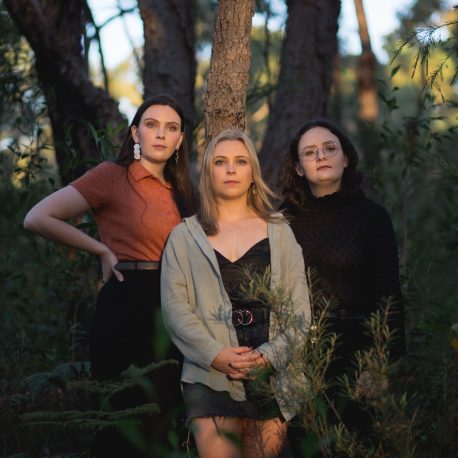 Folk darlings The Fallen Robins sharpened their beaks on blackboard slots and are now spreading their wings on the big stage. The trio of Sydney-born sisters have captivated audiences with their soaring sibling harmonies and poignant feminine storytelling, drawing comparisons to the likes of First Aid Kit and fellow Australian group The McClymonts. Comprised of singer/songwriter Charlotte, hype-woman and tambourine extraordinaire Jess, and multi-instrumentalist Sarah, the girls’ natural chemistry shines throughout their work.

The trio began their music journey as children, singing together on long car rides and at family gatherings, and began performing within the Folk Festival scene straight out of high school. With musical influences ranging from Dolly Parton to The Carpenters to Passenger, the group define their sound as somewhere in the region of folk/country. The trio recently released their debut EP ‘Stupid Little Girls’, showcasing songwriting that traverses the landscape of young womanhood with grit and endearing candour.

The Fallen Robins have had recent success with two of their recent singles securing the #2 slot on the Triple J Unearthed Roots charts. Last year, they received high rotation on Australian Country Radio and an ASA Australian Songwriting Contest shortlist, and sold out two shows at Sydney’s iconic Camelot Lounge. With such impressive achievements under their belts, these sisters are ones to watch.