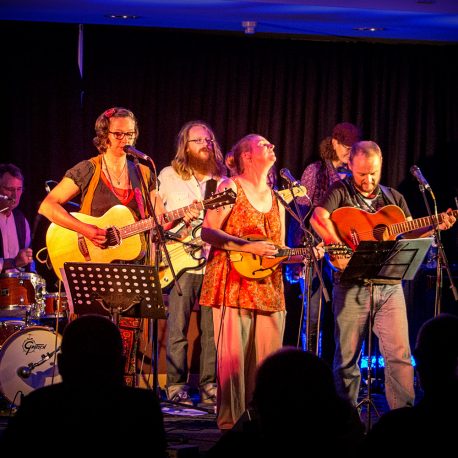 “We might get fifty thousand!” The rolling sea of humanity that came to Woodstock made the eventual numbers unknowable. Indescribable! The biggest peace-time gathering to that point in human history? Half a million at the festival, and another half a million turned away? And all on a Summer’s weekend in 1969, on Yasgurs’ old dairy farm, near sleepy conservative Bethel, upstate New York. A happening of awesome power, shaking the world, where “peace” was the word.

Woodstock gave the world a close-up meeting with its other self. Neither the “freaks” nor the “squares” had any clear idea of just how large and disparate this “hippy” movement was. Now the world knew. The festival defined the Sixties with 20-20 hindsight. The festival visions for the future were passionate, powerful, and peaceful, defining the “Woodstock Generation”.

Jason Roweth was 5 months old, and a world away here in Australia, but he never once doubted his place in the Woodstock generation! The Roweth Band share a love for, and an alter-ego playing the music of the Sixties. This 50th anniversary show is a 90-minute rollercoaster ride through the biggest musical moments of the festival – in rock music history – with an eye for the unexpected. You might be surprised by some hidden Woodstock musical moments!

You’ll hear the stories – laughs and tears. The small Woodstock stories are the biggest of all! They take the festival beyond a defining, momentous event. The background convergences and chaos make its success all the more miraculous. You’ll shake your head in disbelief.