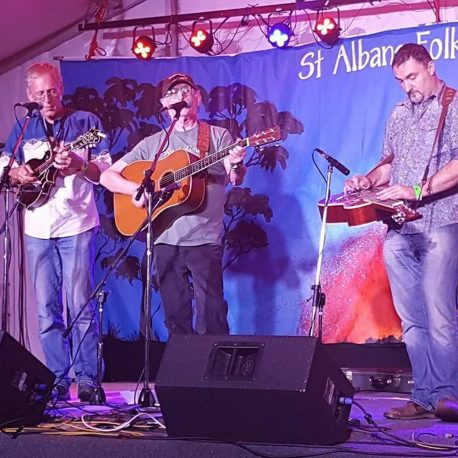 The 3 Jimmies consist of a Scot, an Englishman and a token Australian. Jimmy Rush and Nigel Lever had been playing for many years with the well-known bluegrass band Acoustic Shock when they met up with Quentin Fraser, who was part of the Wollongong bluegrass scene.

All three players discovered a common love for playing fiddle tunes on guitar and could often be found at folk festivals picking until their fingers bled. At some point in time they decided that it would be a good idea to present bluegrass flat-picking guitar as The 3 Jimmies.

Mandolin is occasionally ‘allowed’, as is the occasional Hank Williams song, and even some great Dobro. All three members of the band have been playing together in bluegrass lineups over the past 20 years, including Karen Lynne, Acoustic Shock, 3 Marketeers, The Willing Ponies… the list goes on. (Yes, we know there’s only one band member named Jimmy – a mere technicality).