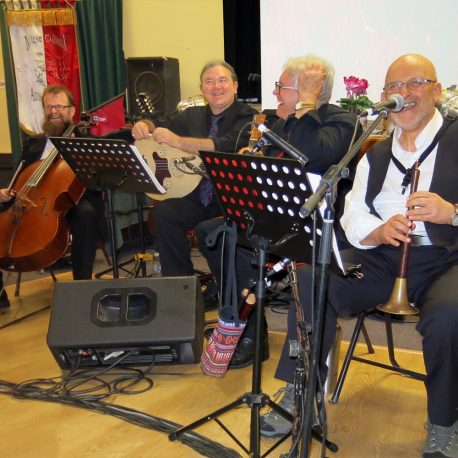 Skorba is a band formed by Andy Busuttil in 2005 to play music about his home islands of Malta and their history. The music is all composed by the band members and draws from influences around the Mediterranean Basin. It is exotic and performed in conjunction with a visual presentation for each song.

The band consists of John Napier, Llew Kiek, John Robinson and Andy Busuttil. Instruments played include bowed and plucked strings, winds, percussion and strong vocals. Songs are sung in English, Maltese and Turkish and there is a narrative that accompanies this particular set of concerts that focus on the Ottoman Siege of Malta in 1565.

Come hear and see the story of the Ottoman Siege of Malta in 1565. Skorba presents the magnificence of this historical of the Maltese Islands in beautifully composed and played songs and thrilling visual images. Lutes, cello, voices, wind instruments and percussion combine in a glorious mosaic of music inspired by the Renaissance period, the Mediterranean and the Ottoman Empire.

A compelling narrative glues the performance and images into a unified story of the insanity of war between the faiths which continues to this day.