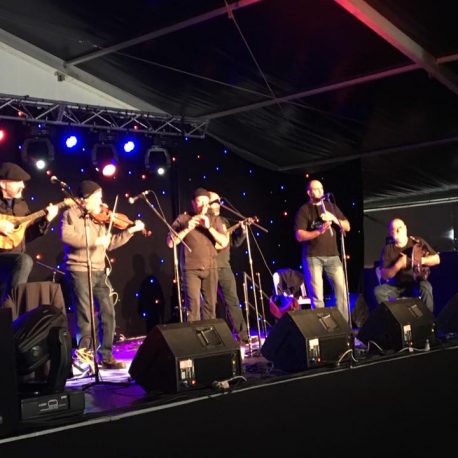 Señor Cabrales is an Australian multi-instrumental group playing the passionate and infectious traditional music from the northern Spanish Principality of Asturias, as well as Galicia, Brittany and other interesting places along Europe’s Atlantic coast. The instrumentation includes fiddle, bouzouki, flute, bagpipes, whistle, mandolin and bodhran.

The members of Señor Cabrales have many years’ experience playing various types of folk music, mostly with past emphasis on the Scots and Irish tradition. We were drawn to other European Celtic traditions through recordings from Brittany, Galicia and Asturias and were greatly influenced by meeting the Asturian band, Felpeyu, which has made several tours to Australia.

Close contact with Felpeyu gave us the opportunity to explore the repertoire and we soon began playing Asturian tunes. The original Señor Cabrales band formed in Bathurst in 2003 to pursue this wonderful musical experience and has grown over time to now include members from Bathurst, the Blue Mountains, NSW South Coast and mid North Coast.

Señor Cabrales has performed at most of the major folk festivals in eastern Australia and at an assortment of other performing venues in Australia and the UK. The band’s three CDs have been well received and reviewed positively.