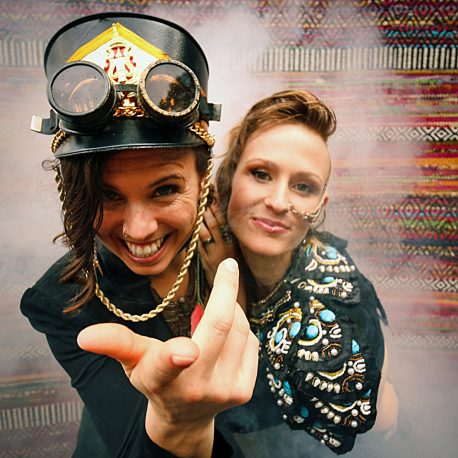 Salt and Steel are two fiery and passionate female performers whose earthy, rock, blues and roots inspired sound has been garnishing a growing tribe of committed followers.

Foot stomping rhythms and driving guitar riffs make for a live show that is nothing short of a wild and stormy ride. Salt and Steel encourage their audience to let go, be free and have a whole lot of fun.

Salt and Steel are Briony Edgar on guitar and vocals and Elle Steele on drums and percussion.

They formed on the road, travelling overseas, when the two desperately decided to give busking a go once their car had broken down. Briony had been playing guitar for a few years but Elle had no experience playing or performing music whatsoever. It turned out that they loved it!

Backed now by their history of competition wins, the recent release of their single, Violet Skies and National radio play on Triple J and ABC National Radio, Salt and Steel are blazing forward and embarking on a new journey for 2019.

They have just released the next installment in their elements series with single The Beast, The Devil and Me. This is the second of four interlinked singles to be released in succession and following the themes of the natural elements Air, Fire, Earth and Water.