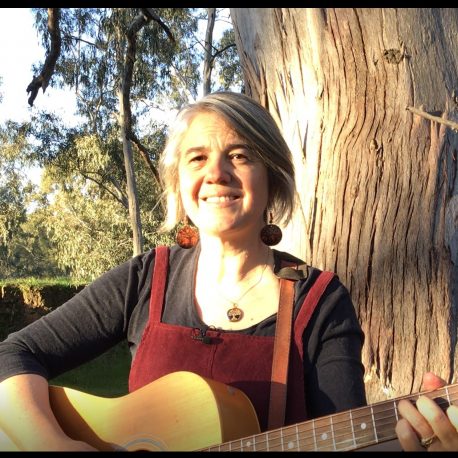 Since her childhood roaming a Sydney bush reserve – no back fence, just trees, sandstone, cicadas, birds and bush – through to her young adult years under the vast skies and vivid hues of far west NSW; the natural environment has been with Nerida as a close friend and inspirer. Nerida has been writing songs for thirty years, and has been deeply influenced by the landscapes she’s been in, and the people she has met. Her latest album, ‘woven’, released March 2021, reflects her passion for stories, especially those of women, rural life, resilience, indigenous Australians and the land that holds us all. “Nerida lives and breathes the landscape of rural Australia and captures in her songs the universal essence of its people” (Margaret Walters).
Having her 3 kids grow up a little has given Nerida greater freedom to travel and perform, and she played in the St Albans, Folk by the Sea, Small Halls (Woodstock) and Yass Celtic festivals in 2019. In 2017, Nerida played in front of 10,000 people at the Canowindra International Balloon challenge, filmed by the ABC Backroads program. 2020 opened the opportunity to join a weekly English folk club via zoom, and access a broader online audience with a series of self-produced songs, filmed en plein air (Wide Open Air Songs). Ten days solitude in an artist in residence program at the Corridor Project on the Galari River saw her wade deeper into poetry writing, along with the songs.