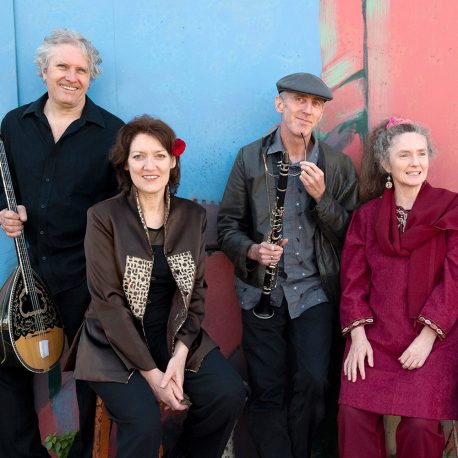 Fronted by the remarkable and magnetic voice of Mara Kiek, Mara! has brought its virtuosic concert performances to audiences in 21 countries. Collaborative performance projects include their legendary album of original music Sezoni (Real World Records) with the 25 voice Bulgarian/Australian Choir Martenitsa producing a lush musical feast. In 2000 they performed a 10-night season of the aerial spectacular Homeland (featuring music from Sezoni) with death-defying acrobats Legs on the Wall for the Sydney Olympics – and again at the Berlin LiteraturWERKstat Festival in 2003. In 2005 the Mara! and Martenitsa ensemble toured Sezoni to WOMAD Reading and the Koprivstitsa Festival in Bulgaria. In 2001 Mara! collaborated with the Queensland Philharmonic Orchestra and Choir in Brisbane to perform Mara Kiek’s magnificent Neizvestnoto . In 2004 Mara! and Martenitsa previewed and broadcast their new suite of original music in Italian Tra Parole E Silenzio at Fox Studios in Sydney, then in 2012 they released it on CD and presented it at WOMADelaide 2013.

Mara!’s musicians are among the most highly regarded world and jazz players in Australia. Together in Mara! they create one of Australia’s most exciting, innovative and uplifting ensembles.