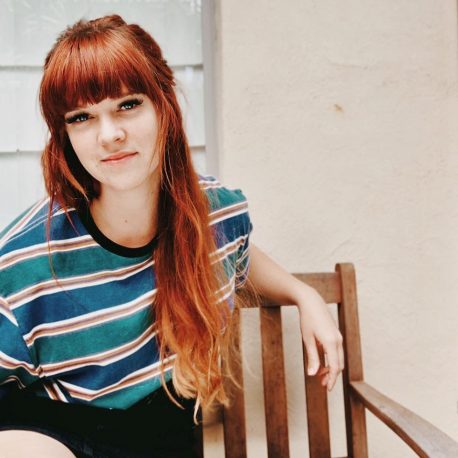 Engaging, emotional and witty, Kay is an indie-folk singer-songwriter with a remarkably agile, engaging, honest, soul-bearing voice and a wry, dry-ice sense of humour. With a live performance style that is much like being invited into her lounge room, her songs are truly stories set to melody, by turns relatable, humorous and heartbreaking. Creating an intimacy between audience and performer through vulnerability, Kay’s live show is likely to leave you wondering whether all of the songs were about you.

The co-ordination that never showed up for Kay on any sort of sporting field has made itself known in a marriage of acoustic guitar, voice and lyrics that are practiced in the art of observation. From the self-love anthem Bikini Body to the heartfelt story of missed conections in All In The Timing, Kay’s songs highlight the commonalities between human beings, pulling at them like heartstrings.

After releasing the original Christmas single Giftcard in December 2018, Kay toured the summer festival circuit in Australia, including stand out shows at the Illawarra Folk festival and Cygnett Folk Festival, performing some of her back catalogue and previewing songs from her upcoming release. Keeping up a string of singles, All In The Timing was recorded live in a community hall of Kay’s hometown, Thirroul and released in early 2019, closely followed by her latest offering May The Fourth. A song about dating someone who really likes Star Wars, May The Fourth is for those who are still trying to work out what order the episodes go in and is accompanied by a DIY music video involving a projector, some popcorn and a glitter leotard. Jangly guitars, a gliding vocal and clever, pop-cultured lyrics deliver a witty and relatable love song, launched over several shows including Jamberoo Music Festival.