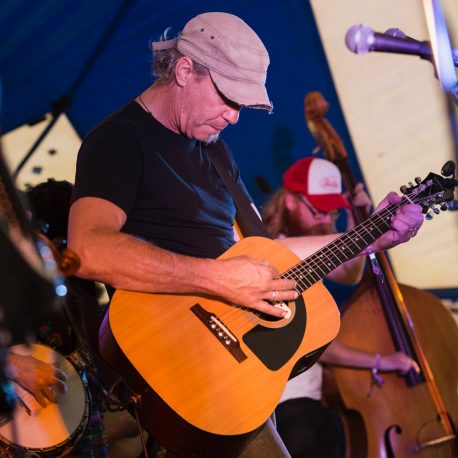 Very original songs by singer-songwriter Den Hanrahan – with his band The Rum Runners – seasoned musos Matt Nightingale (double bass), Peter Logue (accordion), Zena Armstrong (bodhran) and Gleny Rae Virus (fiddle). Den Hanrahan’s music is a compendium of ballads, anthems and reckless laments from his songbook of the open road. It makes no secret of his love for Americana and the hard-driven word in a recreation of the old-fashioned world that still lives in his heart. While steeped in present-day Australia, the phantom images of the past intrude all over his tales of remorse and redemption, the plaintive song of a bruised and homesick traveller.

With his band The Rum Runners, Hanrahan, taps a style neither frozen in the past nor experimenting with the future but played from the heart, featuring guitar, fiddle, accordion, upright bass and bodhran. His five CD releases, Smoke and Mirrors, Rumrunners, One Horse Town, Black Swamp Road and Red Dust chart his relentless orbit round the country, touring through the landscapes that become his songs – the people, their stories, his own past.