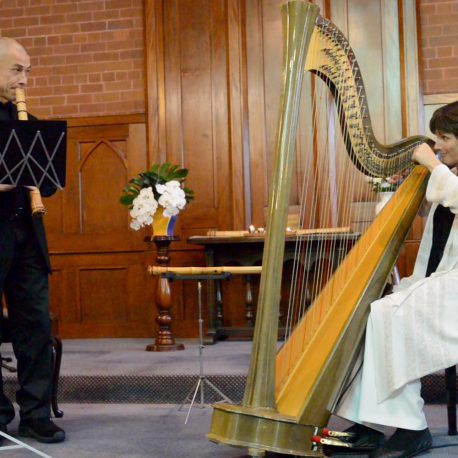 Riley Lee is a Japanese shakuhachi master musician and Cliona Molins is one of Australia’s most accomplished harpists. They have been performing together since 2012 when they played at the inaugural Sydney Sacred Music Festival.

Cliona and Riley combine their distinguished knowledge of two ancient instruments from distinct cultural backgrounds. Riley is the recipient of two of the oldest and most venerated lineages of traditional shakuhachi, which can be traced back to the Zen Buddhist komusô, or “priests of nothingness” of the Edo period in Japan.

In 1980, he became the first non-Japanese to attain the rank of dai shihan or Grand Master. Cliona was classically trained in Dublin at the Royal Irish Academy of Music where she studied both the Irish and concert harp.

In 2018 they released their first recording, Snow Flurries. We are honoured to have such internationally recognised artists at our festival. Riley and Cliona are a match made in musical heaven.