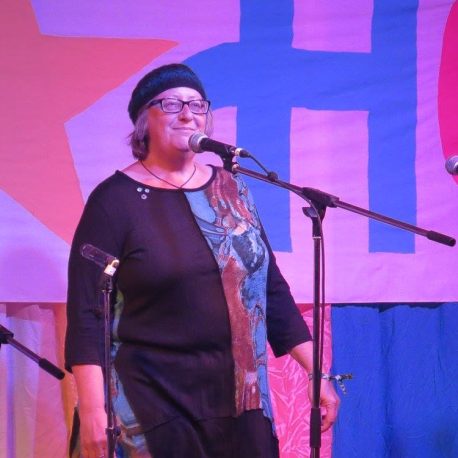 Cathy started playing guitar and singing at around the age of 12 and has indulged in music as a hobby ever since, busking in Sydney from the age of 15 and moving on to playing and calling dances with a couple of bush bands through her twenties and early thirties. Over the last fifteen years or so, she’s been getting her musical fix rehearsing and performing with Sydney choirs Solidarity and Ecopella, singing in sessions at folk festivals and other gatherings, and doing the occasional solo folk club performance. Cathy’s repertoire mainly consists of interpretations of songs from the folk tradition, but also includes original and co-written pieces and more than a few parodies and filks for special occasions – or particular (usually political) targets!

Singing sessions are one of Cathy’s favourite things to do – the diversity of songs and singers provides wonderful entertainment and opportunities for singing along, learning new songs and stories, and encouraging other singers to “have a go”. Please join Cathy and friends at the Sydney Folk Festival Singing Session.