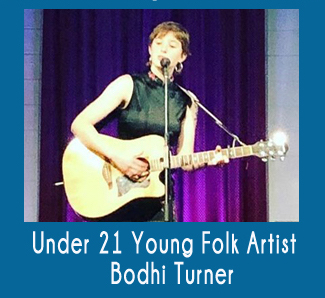 Bodhi Turner – South coast singer-songwriter Bodhi Turner received the Under 21 years Senior Award after impressing the panel with her heartfelt original songwriting. Performing as a solo artist Bodhi has done two professional gigs playing as a support act as well as appearing at the Candelo Folk Festival for a music camp at the crossing in Bermagui.

“I am a singer, song writer and guitarist. I have 10 original songs that are complete for performance. I performed a 3 hour performance at Mal’s Pizza Bite in Bega playing a mix of originals and covers. I regularly busk around Bega.”